Dr. Krimigis has been a practicing optometrist for over 20 years. Growing up in Silver Spring, MD, Dr. Krimigis graduated with a Bachelor of Science degree in Biology from the University of Maryland Baltimore County in 1991. After working in research for a couple years, he attended the Southern College of Optometry in Memphis, Tennessee. In 1996, Dr. Krimigis completed an extern rotation at the National Naval Medical Center in Bethesda, MD and earned his doctorate of optometry in 1997.

Dr. Krimigis moved to Rochester, MN after graduation and worked as an independent practitioner where he became credentialed as a Mayo health care provider. In 1999,  he moved back to the east coast and in 2009, Dr. Krimigis opened the Eye Place at Creekside in Winchester, VA which is now a MyEyeDr location.

In 2013, Dr. Krimigis and his wife Dr. Josephine Wiggins (also an optometrist) moved to Waterford, VA which is where they currently reside with their daughters, Kennedy and Nicole. In their spare time, they enjoy going to the beach and visiting family in Maryland and Tennessee.

Dr. Krimigis is a therapeutically certified optometrist and has a particular interest in fitting multi-focal contact lenses. He also enjoys addressing the vision needs of pediatric patients. 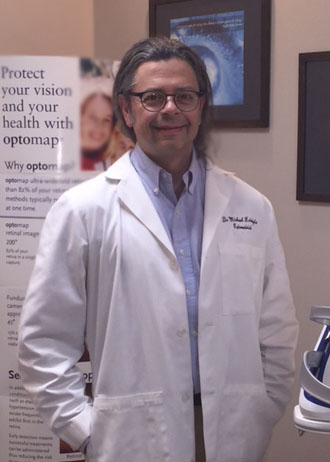 We are looking forward to hearing from you. Please feel free to get in touch via the form below, we will get back to you as soon as possible.